Loué celebrates turning 60 with a contest

In France, the Loué brand has been synonymous with quality chicken and egg production for well over half a century. So when the company turned 60 last summer, they decided to celebrate.

Between March and June 2018, every time supermarket shoppers bought a carton of Loué eggs they could win anything from an electric bicycle to a ride in a hot-air balloon. And taking part in the competition could not have been easier.

Every single carton of Loué ‘Red Label’ or ‘Bio’ eggs came with a unique code printed on the back, just above the fold line.

When shoppers keyed the code into a page on Loué’s website, they would automatically win €1 off their next purchase of Loué eggs. And they could also see if they had won one of the bigger prizes. 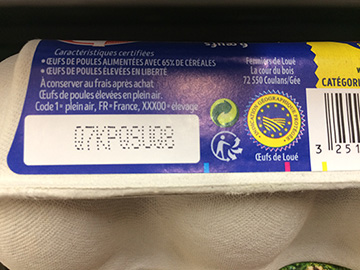 Each unique promotional code was printed clearly on the back of each egg carton, just above the fold line.

“For us, it was a way of celebrating our 60th birthday with our customers,”  says Bruno Mousset, Managing Director of Loeuf. “And at the same time, we gave sales a boost,” adds Sales Director Christophe Bériard.

Even though unique labels are familiar in many product categories, they are relatively new to the egg category. But thanks to Hartmann’s no-fuss label technology, consumers found it easy to take part in the competition. And Loué’s anniversary campaign was a great success.